Living two lives of adventure - From Chaos to Peace

It is always a weird feeling

I am right back in my old daily grind

as if all the adventures never happened

As I mentioned in my last weeks post, I am in my home country Switzerland right now. Although I live in Canada since 2004 I still have a business here with clients, and I come here at least twice a year, usually in spring and in fall.

In today’s world a lot can be done online through Skype, TeamViewer, remote access and other apps to take care of your clients from where ever you are in the world. But back in 2003 when I announced that I will be living in Canada but still have a business in Switzerland, I was basically told I was crazy.

I grew up in a typical Swiss middle class family where it was important to study and work hard to have a reputable, good paying job. A job with a promise to climb the corporate ladder was crucial in order to look good amongst family, friends and most important neighbors. Any variation from this setup was frowned on. Even me becoming self employed in 1998 was recognized as dangerous and reckless. That I was succesful and made more money than when I was an employee did not make a difference.

I was the ‘rebel’ in our family although for a long time a quiet and adapted one. When in 2003 I said I take a sabbatical and go travel through Canada, not many were impressed. Interestingly family and friends saw it more negative for my career and business than my clients ever did. I was warned by many of the dangers for my vocational and financial future, while my clients were happy for me and made arrangements to bridge the time until i would be back.

… Who would have thought !

I came back from Canada in January 2004 just to announce that i would leave again by May (I had met my now husband). That’s when it started what I call ‘commuting back and forth’. In the beginning I would be in Switzerland from February till April, then in Canada from May till August, back in Switzerland September till November and back in my new home Canada for the holidays November till January. In between I worked from Canada for my clients in Switzerland. With one particular client even without the help of the internet, a fax machine was his tool of choice. He would send his requests before he left the office in the evening and because of the time difference between Canada and Switzerland, by the time he came back the next morning the work was done. He was proud to have a 24-hour operation how he called it.

Most people in Switzerland thought i go on vacation to Canada while the Canadians thought i go to Switzerland for vacation 🙂 Many did not understand how it all worked (some still don’t) but my clients always adapted and my motto is:

as long as they are loyal to me

I will be loyal to them

After having these same clients now for over a decade they are all almost like family, No matter what is going on in my adventurous life since I met my husband, I am still available for them, they are still a priority, no matter how crazy our life gets. For example:

In winter 2005/2006 my husband and lived out in the bush, literally. 12 km from the next neighbour about 40 km from the next village and store. We were living in an old house where nobody but pack rats had lived for years, the barn for the horses was in better shape than the house. 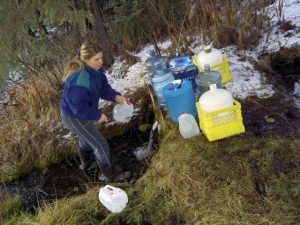 me getting water December 2005

There was no electricity and no running water.

The first thing we needed (of course) was a satellite dish so I could communicate with my clients. For electricity, we used 4 small solar panels or a noisy generator, for water we had to drive 10 km to get to a little running creek where we filled all kinds of bottles and barrels we had.

It was important to me at the time that my clients did not really know in what ‘condition’ I was living in and that I still could serve them well. Unfortunately, this property deal fell through and we had to move out the next spring, but it was a cool experience.

Then in Spring 2008, we were ready for the next adventure, we moved across Canada from West to East, household, business, animals and all. We traveled with 3 horses, 4 dogs, 4 cats, two vehicles pulling a trailer each, living in the camper the over 6’000 km (over 3’730 miles) across the continent. We took our time, drove only about 500 km a day, staying on camp grounds at night.

We had bought a piece of property with a dilapidated house in Nova Scotia, this way at least we had a place to go to with our animals. The first few weeks we had to live in the camper in the driveway because the house was not livable, it was almost falling in, all the water lines were busted, rats in the toilet. Again the first thing that was working was the internet and the fax machine for my business to serve my clients. 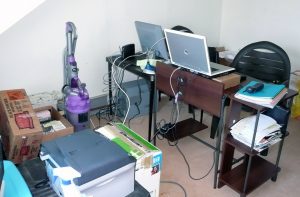 My ‘office’ consisted of an old camping table with my laptop on it, a fax/printer on a cardboard box and I myself sat on a camping chair.

I had to do demanding work (consolidation for a European corporation) for one of my clients and I made sure he did not know or notice in what environment i was in and I still delivered outstanding high quality work (I was told).

What is the take away of this?

Sometimes we have to be a little bold and very creative if we want to live our dream.

It’s not easy to break out of the norm and there are always plenty of well meaning friends and family members that warn you and tell you it can’t be done. You might have to be willing to take some calculated risks, willing to live and work under sub-optimal circumstances for a while. It can be very hard and frustrating at times but it is also so very rewarding in the end.

Adventures give our life the flavor

and later stories to remember and tell.

In 2010, after renovating the house in Nova Scotia, we traveled back to British Columbia because we were homesick. We traveled back the same way we came, this time with 2 horses, 2 dogs and 2 cats, the same vehicles and trailers.

Since then we ‘settled’ down and stayed put in one place. We find our challenges in other ways for now, but I am sure eventually the gypsy bug will take over again and we will go on to new adventures.

Where will it will take us ? Who knows. Have you had a special adventure? I’d love to hear about it.

The Power Of Intention

Be Creatively You with Samantha Paternoster

From Burnout to Balance with Rhianna Campbell

Why A Few Minutes A Day Is Like Magic

Audio Branding and How Sound Influences Us with Jodi Krangle

Join my FREE Facebook Group From Chaos to Peace

be part of a supportive community, ask questions, celebrate wins