What happens if you die without a will?

Not having a will puts a lot of unnecessary strain on your family in a time of grief.

In my last post, I talked about identifying, protecting and storing important paper documents and one of these documents was a last will and testament. (Download your checklist of important documents here )

A lot of people seem to think, that they don’t need a will while they are young, that it is just for old folks or people with terminal illness. But on the contrary, in my eyes, it is most important to have a will when you are in a relationship, married and for sure when you have children.

Yet, surveys here in Canada from 2012 and 2013 revealed that about half of Canadians have no will and a Gallup Poll in 2016 showed that 56% of Americans don’t have a will.

When asked why people said, “they just didn’t get around to it”, meaning, they procrastinate.

Samuel Sagan says in his book Death: The Great Journey:

never bother with any form of preparation for their death.

Failing to make a will is not just dumb; it’s selfish

Why would he say “selfish”?

Selfish, because you don’t want to think about your death and so you procrastinate making a will. Selfish, because not having a will puts a lot of unnecessary strain on your family. While they are grieving your passing they will also have to deal with a big mess that you left behind.

Just to make things clear, I am not a lawyer, so I can only scratch the surface of the legal implications. But even the few reasons I list below should be enough to get you in gear to get a will and make sure your family will be ok after you die.

To die without a will means, you die intestate, which is the fancy way of saying the state (country, province) will determine and oversee the distribution of your assets.

You might think, “so what?” Well, here are some of the

Here in British Columbia Canada for example, if there is no valid will, the spouse of the deceased receives the first $300,000 from the estate. But if there are children from a prior relationship (not uncommon these days) the spouse only receives $150,000.

But what if that is not possible? Especially in high priced areas like here in Vancouver she might not be able to buy her own home and will be forced to sell it (and possibly give part of the money to another relative which could mean she can’t even buy another house).

Is that what you want for your loved ones, that they possibly lose their home while they are grieving?

I don’t think you do, that’s why a will is something we all need, no matter how old or how wealthy.

I admit, maybe losing the house is not be a consequence where you are. But just this one example shows that it might be a good idea to find out what it means to die without a will in your part of the world.

To do that you can simply ask Google for example like I did below, 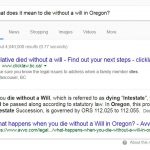 I used Oregon as an example but you can put your State, Province or Country there instead and you get an idea what

As a next step, You could buy a kit to make a will at Staples or in other stores which is better than not having a will. But depending on your situation it’s probably worth it to go to a lawyer and have a will written up for you and your unique situation. Of course, a lawyer costs more than doing nothing or buying a kit but

Compared to the problems that can arise if you die without a will, it really is a small financial investment.

A will is another way of saying “I love you”  and is a last gift you leave your family and loved ones.

Hopefully, after reading this you are scheduling an appointment with a lawyer and get a will done up if you don’t have one yet.