It Only Works If You Do The Work - Conny Graf

It Only Works If You Do The Work

A lot of people overestimate the importance of one big change and underestimate the value of making small improvements on a daily basis.

I would add, they are not just overestimating the importance of one big change, but also underestimating the challenging effects of such a big change.
The challenging effects of being catapulted into a scenario or environment where you don’t recognize yourself and you don’t know how to handle it all. That’s why we fall back to how we did things before, to be back in familiar territory.
The impact created by small changes in your habits on the other hand is similar to the effect of shifting the route of an airplane by just a few degrees. We don’t need to make drastic changes to arrive somewhere different, or to have a different or better result, we can make small changes into the right direction on a regular basis.
That’s why going slow is going fast. Making small tweaks, addressing the real reasons, applying daily what we are learning, we can experience the questions and the feelings that come up, work through them and that’s when the knowing begins to sinks in, you are on your way.
Unfortunately small tweaks often appear to make no difference at first, at least until you cross a critical threshold. And because most people are in a hurry, if nothing changes within a few days they throw their hands in the air and give up. They say that didn’t work and move on to a different approach in the hopes that this is the one gets them to where they want to be without them having to do the work.
A lot of us feel we have nothing under control these days, and it’s true, we don’t have under control whether we are going to reach our goals or not whether there is a pandemic going on or not. But what we always have under control, or in our control, is what we are doing on a daily basis.
Last month in my book club we read Seth Godin’s new book “The Practice”. I I love this book on so many levels, it’s about what we do daily, not about the outcome. Seth of course can articulate what I am trying to say here so much better, with so much elegance so let me quote him:
Seth writes

Effective goals aren’t based on the end result: they are commitments to the process. That commitment is completely under your control, even if the end result can’t be. But the only way to have a commitment is to begin. (page 31)
The practice requires a commitment to a series of steps, not a miracle. (page 40).
Choose to commit to the journey, not to any particular engagement. (page 73)
If you want to get in shape, it’s not difficult. Spend an hour a day running or at the gym. Do that for six months or a year. Done. That’s not the difficult part. The difficult part is becoming the kind of person who goes to the gym every day. (page 103)

BAM, there you have it.
Goals, visions, intentions and New Years resolutions are good for setting a direction, but action, daily habits, you actually doing something, that serve those goals and visions is needed for making progress and for eventually reaching those goals.
The best part, those habits and steps will equip you with the tools needed to maintain your success once you reached your goal. That’s how the other Mrs Graf kept the weight off, that’s how people stay debt free, and how people live a clutter free life.
Now listen closely, even if you don’t reach your goal nothing is lost, read that again: nothing is lost! Because in this process you became a different person, a person that shows up for herself and her goal. A person that does the work. This is a win-win-win situation, I hope you can see that.
Just as life is a journey not a destination, decluttering is a journey not an event – I talked about that in episode 21 already, go have a listen 🙂
Living a clutter free life doesn’t mean you have no clutter in your life. It means you are constantly identifying and actively working on releasing and letting go of what ever you identify as clutter in your physical, digital, mental, emotional or social environment.
If you would want some help with that let me know, you can book a complimentary 20-minute call here, and if you’d like some simple outside accountability to reach your goals, I have you covered with that too, with the

From Chaos to Peace Accountability Program

How Perfectionism Gets In Your Way with Dr. Camila Williams

The Only One Stopping You Is You with CJ Lopez

The Truth About Things That Suck with Mindy Henderson

Create Harmony In Your Environment With Meena Jagpal-Paré 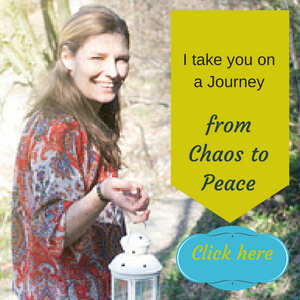 Join my FREE Facebook Group From Chaos to Peace

be part of a supportive community, ask questions, celebrate wins